The heritage rally is an initiative for exploring local heritage, developed by the Pays Loire Touraine, with a view to reaching out to wider audiences through a more engaging approach. Designed as an independent discovery circular route across a series of municipalities, it enables visitors to become active observers of the surroundings thanks to a booklet. Initiated in 2014 across ten municipalities, the rally was then extended to encompass two other itineraries and has enabled the development and distribution of sustainable sightseeing tools.

The Pays Loire Touraine, which has been awarded the Region of Art and History label, is committed to raising residents’ awareness of their living environment by enabling them to become reacquainted with their heritage through a range of actions (guided tours, exhibitions, children’s workshops, conferences, activity courses and more). The rally forms part of these actions.

The rally seeks to raise residents’ and visitors’ awareness of local heritage and its values through a discovery trail to be embarked on at their leisure, encouraging their observational skills.

Exploring at their leisure

The heritage rally invites visitors to become active observers of the surrounding areas, by using the discovery booklets that can be downloaded online or are available free of charge in the tourist offices in the municipalities the rally goes through (Val d’Amboise, Chenonceau Bléré Val de Cher, Montlouis sur Loire and Pays du Vouvray). Comprising a series of questions and riddles (anagram and various word puzzles), the booklet calls on the visitor’s observational talents by drawing their attention to specific details (dates indicated, sculptures, materials, techniques, architecture, trades and historical figures). On foot, by bike or in the car, you can thus take your sightseeing trip into your own hands, free to make your own choices. Such flexibility is undoubtedly what makes this tool so appealing, which also drew inspiration from previous experiments conducted in the context of the network of towns and regions of art and history (in Lognes in particular).

Initiated in 2014, to date the rally is possible across three different itineraries:

Each itinerary is subject to a launch event held on the last Sunday in June. Split into twenty or so teams, the participants are handed a booklet before setting off to explore the area. At the end of the day, the points are counted and the winners get prizes donated by local partners (such as a hot air balloon flight or château tour). The rally launch event is a great way to get local stakeholders involved on a large scale – beyond merely the municipalities forming part of the itineraries.

The rally has proved hugely popular with the public, going by the satisfaction surveys sent out in 2015. It has turned out to be a tremendous tool for showcasing small municipalities that often lie below the radar and have few means at their disposal, as well as for creating synergies between local stakeholders.

The three itineraries developed until now have followed a sweeping route, often running along the hydrographic network. The partners are now planning to develop shorter itineraries over the next few years, across 5 to 6 municipalities max., for a more flexible choice of options and shorter touring possibilities (half-day).

In order to distribute the booklet contents more widely and make it easier for particularly local authorities to use, there are also plans to propose factsheets per municipality. 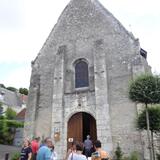