This exhibition looks at the different ways of crossing the river and their history. Braving the dangers and difficulties to get to the other side has always been a necessity. Local populations, merchants and travellers relied on fords, ferries and ferrymen to venture across the river. For a long time, bridges straddling the Loire were a rare sight.

In the 17th and 18th centuries, major bridge-building work was undertaken on the Loire, marking the beginning of a building and development policy.

It was not until the 19th century, however, that engineering structures gained ground, thanks to the development of the railways and rise in metal construction. Briare bridge-canal and the Nantes transporter bridge were among the symbolic landmarks built over this period.

In times of conflict, these structures have become strategic pawns and the Loire a preferential transport route. The Loire's eventful history in connection with war goes back a long way, and the 20th century alone was marked by successive destruction/construction phases. 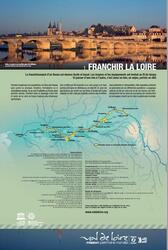