The new headquarters of the Touraine Archaeological Society

On 13 May 2016, the newly restored old Saint-Libert chapel was inaugurated. As the property and headquarters of the Touraine Archaeological Society (SAT), this is an outstanding setting for hosting its regular activities (meetings, collection studies, exhibitions, conferences, etc.) and temporary events, as well as hiring out to external partners (concerts, hosting seminars, etc.). Thanks to this initiative, the chapel, which was long used for purposes which did not convey its true value, has been restored to its former glory. It now accommodates an altogether fitting contemporary architectural project.

For the city of Tours, the site and its immediate surroundings are of significant historical and heritage interest. Built overlooking the Loire in the north-east corner of the rampart of the 4th  century Gallo-Roman castrum (fortress), the present-day Saint-Libert chapel dates back to the 12th century. In the 18th century it fell into disuse, and was repurposed for industrial and craft activities for many decades. The Touraine Archaeological Society (SAT) applied for a building permit in 2011 to acquire the site for its offices.

In 2012 and 2013, archaeological digs and assessments were carried out by Indre-et-Loire County Council archaeologists working on a pro-bono basis. These excavations identified the vestiges of successive chapels, the succession of different altar bases, and unearthed 52 skeletons (which were reburied in the chapel before works began), one top-hat kiln and a bishop statue.

The chapel was restored between May 2013 and April 2015. Its redevelopment had three uses in mind: the main hall, the nave, given over to cultural events and exhibitions, the collection storage galleries and the office "module". Thanks to this work, the 12th century volumes were restored, the Gallo-Roman wall was preserved and showcased on the street side, and the three loopholes were recreated on the north side. The City of Tours enabled the west square to be cleared and its original entrance is now once again in view. The offices are housed in a new building boasting a cutting-edge design, extending the chapel's east side, where the chevet once stood.

The project was funded by the Touraine Archaeological Societywith assistance from the Département-level Council, City of Tours and 296 donors through the Fondation du patrimoine. 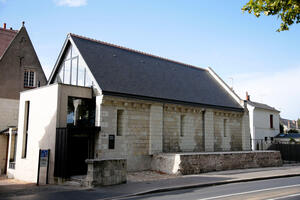 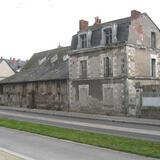 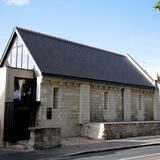 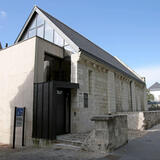 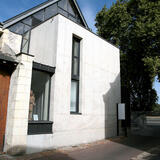