Raising awareness among a generation of schoolchildren of the flooding risk

The Maisons de Loire centres have spent more than two decades working in favour of restoring a flood risk culture. They have sought to step up initiatives for schoolchildren, who represent the future of our local areas. As such, they have designed a programme for 10-11 year olds, based on two teaching aids designed by the Fédération des Maisons de Loire – “La Maison inondée” and “HydroLoire” – as well as a tailoring of events to the local area in question. Several thousand youngsters living near the Loire have so far been reached by the campaign.

Raising the awareness of residents in the Loire Valley and around its tributaries regarding the major flooding risk is key to enabling crisis management where everyone acts responsibly and appropriately.

After a test phase involving 25 classes in 2013, support from the institutional partners (Centre-Val de Loire Regional Council, the Etablissement Public Loire and State) paved the way for a consolidation phase in 2014/2015. Accordingly, 91 final-year classes in primary school benefited from a free awareness module entailing 2 half-days (1 in the classroom and 1 out in the field, near the school) in 2014/15 (schools whose municipality lies in a flood-prone area).

The aim was then to reach 150 classes a year.

Two specially produced tools can be used alongside the event:

Beyond the "vulnerability of a residential area", it is first and foremost the "vulnerability of residents" that is the primary focus of this tool. Since the intention is to showcase a "flooded" rather than a “flood-prone” home, onlookers are not presented in this instance with a “waterproof home” where the occupants could “protect” themselves in the event of the river breaking its banks.

The main learning outcomes are as follows: 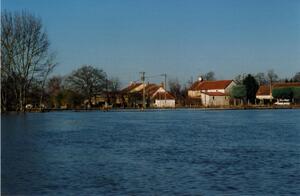 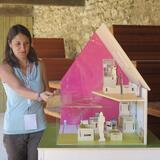