This publication, entitled "Inland navigation under the Ancien Régime", explores the history of navigation throughout the sweeping 18th century, from the attentive administration of Colbert to the public policy introduced by Turgot in terms of river traffic. The aim is to yield insight into how this public policy was crafted and officially established, to grasp the associated intellectual and administrative conditions and to identify the interactions between stakeholders that brought it about.

Inland navigation is a special public policy category in France, which gradually emerged over the 18th century. It prompted a new perception of travel according to which the advent of a system of interconnected waterways would be a means for the State to forge a national market and unite its territory. Insofar as the King and his administration would be the first to reap the benefits of the increase in trade and possibilities of travel, they had to be the primary promoters.

Clearly formulated in the latter half of the 18th century, such a concept is the fruit of a unique chapter in history, during which economic, political, intellectual and administrative factors came into play. From Colbert through until the 1770s, inland navigation thus progressed from being a new public concern to a subject for administration, before being introduced as public policy from Turgot's time. Provide an insight into how this public policy was crafted and officially established, grasp the associated intellectual and administrative conditions and identify the interactions between stakeholders that brought it about: this is what this book sets out to achieve. 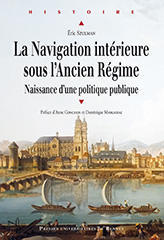