As part of an action research programme underway in Villandry, three workshops were held this autumn following in the footsteps of the landscape trails held in June 2013. The aim was to enlist participating villagers’ help in pinpointing the various landscaping issues involved and in mapping out paths of action to “dynamise and restructure the centre of Villandry".

After watching a video on the landscape trails, participants were asked to form groups of 6 to 8 people each and create maps of issues involved and places where action was required in the municipality; results were then pooled.

Following the workshop, the team of landscape architects/researchers formalised its conclusions in a summary map and drew up an activation plan in preparation for the design phase (document downloadable from the initiative’s website).

Basing itself on the document drafted by the team, the first workshop focused on the task of "Dynamising and restructuring the centre of Villandry".

Students from Angers landscaping school (Agrocampus Ouest) divided the event up into 4 sub-workshops providing light-hearted ways of clarifying the project’s intentions with regard to the task in question:

The second workshop was designed to inform participants on the project’s “intentions” as mapped out in the first workshop, so as to then define together what concrete actions had to be undertaken to accomplish the task and portray them in plan view and then in perspective. 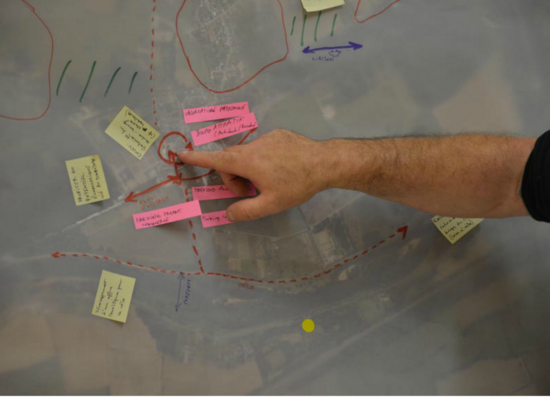 Emphasis is put on the sense of community that the initiative inspires – a major factor in ensuring continuing commitment on the villagers’ part without causing any diminution in the quality of work carried out.

The action research programme underway in Villandry is part of the PDD2 (Paysage et Développement Durable – Landscape and Sustainable Development) programme, the proceedings of whose midway seminar have been published.