The CRT (regional tourist board) published an interim report for the 2017 tourist season. All the figures are looking good compared with last year, and even 2015, which was itself a good year. To ensure that this trend continues, the Centre-Val de Loire Region is carrying out several projects, including celebrating the 500th anniversary of the Renaissance in 2019.

The interim report for the 2017 tourist season drawn up by the CRT is therefore positive: increased visitor numbers, return of clientele from Europe and further afield (particularly America and Asia), etc. In particular, this is down to the renewal of opportunities and events offered by the monuments, sites and museums of the region.

Amongst the places of interest for visitors, heritage and gardens are front and centre (the 15 monuments in the Major Sites’ Excellence initiative* alone total 3.5 million admissions, i.e. 55% of the regional total of admissions to visitor sites). Next come cycle rides (with nearly 1 million cyclists on the Loire à Vélo cycle path), the region’s delicious food and wine, and the leisure sites.

The “tops du tourisme” awards in the Loire Valley brought together nearly 500 stakeholders on 2 October at the Grange de Meslay. During this event, which aims to promote and reward exemplary initiatives which contribute to tourism promotion and development, Château du Rivau, Château de Chenonceau and the Syndicat des Producteurs de vins de Touraine Chenonceaux (Trade Union of Producers of Touraine-Chenonceaux wines) were awarded prizes.

Château du Rivau , in Lémeré in Indre-et-Loire, was awarded the “Human adventure” TOPS for Éric and Patricia Laigneau’s project to renovate and reinvent the chateau, which begun in 1992.

The jury’s special prize was awarded to Château de Chenonceau and the Syndicat des Producteurs de vins de Touraine Chenonceaux, for the tasting under the stars event which they have been carrying out together for the past 4 years.

In 2019, the region will celebrate the 500th anniversary of the Renaissance

In 2019, the Centre-Val de Loire Region will be celebrating the 500th anniversary of the Renaissance and a whole host of projects are in the pipeline, including organising an intergovernmental Franco-Italian summit at Chambord, creating a travelling show combining contemporary creation with digital creativity and scheduling international scientific meetings. In this context, as of now, Mission Val de Loire is taking action to play its part in this major project themed around the influence of Italy and Renaissance ideas on the architectural and landscape heritage of the Loire Valley. 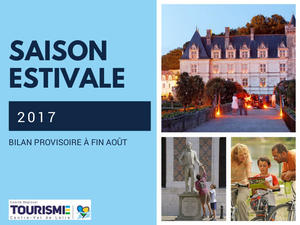