Château de Montsoreau reopened on 8 April 2016, transformed into a museum of contemporary art. Property of the Département of Maine-et-Loire, it was made available via a long-term (25-year) lease. Philippe Méaille, a private collector and owner of a major contemporary art collection, is developing his project there by exhibiting a part of his collection.

Today’s visitors can acquaint themselves with the château’s architecture along with the Art&Language works on exhibition. The first gallery contains self-portraits by the movement’s artists, while the second exhibits a monumental 1630 painting by Rubens depicting Saint George slaying the dragon, along with a painting inspired by Gustave Courbet’s “Woman with a Parrot”. The “Mirror Pieces” are sure to stop visitors in their tracks before they go upstairs to acquaint themselves with the concepts behind the Art&Language movement and a selection of works by its adherents. 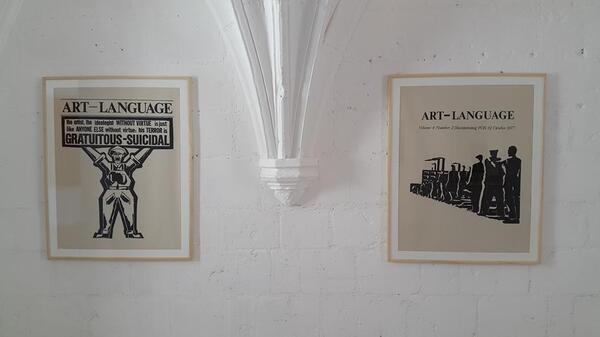 The term “conceptual art” refers to an artistic movement that first appeared in the United States around 1965 and then made its way to England, where the Art-Language magazine was founded. The movement’s artists are not interested in “depicting” or “expressing”. They present “artistic proposals”, all of which are in search of the idea of art. The artist seeks to explore the way in which art operates. Earlier works such as “Air-conditioning Show” are scientific protocols bearing on imaginary experiences. Later works are essentially textual and hark back to themselves alone.