The newly restored former Saint-Libert Chapel in Tours was inaugurated on 13 May 2016. Property and headquarters of the Touraine Archaeological Society (SAT), it provides its owners with an ideal setting for their activities, permanent (office, meeting-room, collections, etc.) and temporary (lectures, concerts, seminar hosting, etc.) alike. The project enabled restoration of a piece of historical heritage set on the banks of the Loire and added to our knowledge of it – a perfect illustration of the Loire Valley World Heritage site’s values.

Built alongside the Loire in the northeast corner of the 4th-century Gallo-Roman castrum’s rampart, the present Saint-Libert Chapel dates back to the 12th century. It was disfigured after being converted to accommodate industrial and artisanal activities.

The Touraine Archaeological Society was founded in 1840, very much in keeping with ideas on historical research and heritage protection that were gaining currency at the time. It welcomes anybody – amateurs and the simply curious, students and professionals alike – who is interested in working at the study, promotion and illustration of Touraine’s past and its heritage. 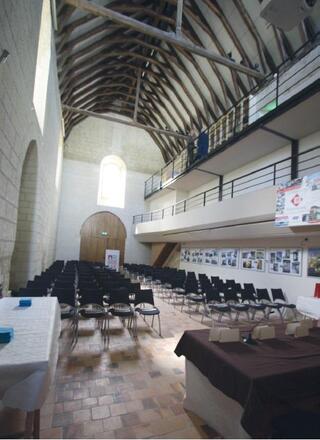 Touraine Archaeological Society acquired the building in 2011, filing a request for a building permit soon afterwards.

In 2012 and 2013, archaeological diagnoses and excavations were carried out, made possible when the Indre-et-Loire General Council kindly made its archaeologists available. Excavations uncovered 52 skeletons (which were reburied in the chapel before restoration work began), a bell furnace and the statue of a bishop, and also led to identification of a succession of altar bases and the remains of successive chapels on the site.

Restoration work on the chapel lasted from May 2013 to April 2015. Its layout was designed in three parts: the main hall, galleries to house the society’s collections and a “module” for offices (a new building closing the chapel to the east and replacing its long-vanished apse). The work also led to the chapel being restored to its 12th-century volume and enabled preservation of the Gallo-Roman wall and re-creation of the three arrow loops on the north side.

The project’s budget was a little under €1,300,000, financed by the SAT and its partners, including mobilisation of 296 subscribers via the Heritage Foundation.

In addition to the budget, the project also benefited from the above-mentioned assistance provided by the Départemental Council as well as help from the City of Tours, which undertook responsibility for destruction of the neighbouring house and layout of the west forecourt.

A book inspired by the excavations of Saint-Libert chapel and the west forecourt will be out in the 3rd quarter of 2016, written by the archaeologists Bruno DUFAY and Samuel Riou from the Indre-et-Loire Départemental Council and jointly published by the FERACF and the SAT. You can advance order a copy from the SAT.