2014 is the five hundredth anniversary of the death of one of the most prestigious queens of France. The memory and the figure of the last duchess of Brittany who was twice Queen of France will be showcased through a cultural programme organised along the Loire, the Centre region and the Pays de la Loire. From today onwards, the anniversary of her death, the general public, will be able to discover the incredible story of Anne of Brittany, exceptional and powerful woman who was both a patron and an aesthete.

This year of celebration will enable the general public to go back in time, through the different stages in her life by going along the Loire, from Nantes to Blois. There is a series of creative and original cultural events planned, most of which are listed below:

The heart of a queen: the funeral of Anne of Brittany

This event in Blois will mark the opening of the Anne of Brittany season. For the first time, the golden reliquary of the queen's heart kept in Nantes is exhibited in Blois in a remembrance of the royal funeral illustrated with illuminated manuscripts. An event not to be missed!

Understanding the oratory of a Queen

Exhibition catalogue on the restoration of the oratory of Anne of Brittany in the Royal abode of Loches.

Music for the funeral of Anne of Brittany

Concert of the Doulce Mémoire ensemble, Musique for the funeral of Anne of Brittany at the Saint-Louis de Blois cathedral with the participation of Yann-Fañch Kemener, co-produced with the Halle aux Grains, the national theatre of Blois

The funeral of Anne of Brittany

The Doulce Mémoire ensemble will evoke one of the first ever royal ceremonies which offers the Queen all of the ritualistic pomp and circumstance of grandiose funerals.

Presentation of the reliquary of Anne of Brittany

To celebrate 500 years since the death of Anne of Brittany, the Château des ducs de Bretagne-Nantes history museum is once again exhibiting the gold reliquary of the queen's heart, on exclusive loan from the Dobrée Museum. The Hermine regrettée (“mourned stoat”, the stoat being the animal representation of the Queen) exhibition on the heart of Anne of Brittany goes over royal funerals and presents miniatures illustrating the manuscripts of the Trépas de l’hermine regrettée (“the death of the mourned stoat”) and the event of the queen's funeral composed by her Herald, Pierre Choque.

Anne of Brittany and illumunation: images of a queen

The park hosts an exhibition dedicated to Anne of Brittany and illumination.

Through the walkways, nineteen large scale reproductions (100 x 150cm) of miniatures enable visitors to explore the different sides of her personality: Her devotion, her role as a wife and mother, her political sense, her appetite for power and patronage.

This exhibition enlarges the intricate details and treasures of the collection of an exception queen.

From 5 July to 2 November

The exhibition brings to life the lost gardens of Blois castle, from Anne of Brittany to Gaston of Orléans, and highlights the link between architecture and landscape during the Renaissance, through tapestries, paintings, treaties, tools and gardening objects, etc.

Festival of Saint Anne, in memory of Anne of Brittany

Doulce Mémoire "Music for the chamber of Anne of Brittany"

Through these concerts and shows, Doulce Mémoire invites us to discover the music which internationally renowned geniuses of the Renaissance, such as Léonard de Vinci, Michel-Ange, Rabelais, François Ist, etc. may have listened to. Some of these geniuses left a significant mark on the Loire Valley and its famous Renaissance castles.

Six castles of the Loire, obvious partners for the celebration

Throughout her entire life, through her marriages, her strategic alliances and her places of residence, Anne of Brittany was a sovereign who left a mark on the famous castles of the Loire, by inhabiting them with panache.

From the Château des ducs de Bretagne in Nantes to the Château Royal in Blois, via the Château de Langeais and those in Amboise and Clos Lucé, not forgetting the Royal City of Loches, the Castles of the Loire were the stage of the exceptional story of Anne of Brittany. 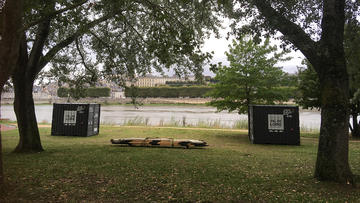 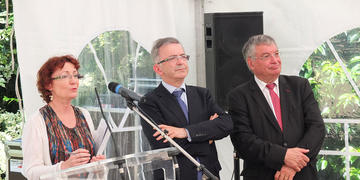