Change at the top of Mission Val de Loire! As of mid-September, Bruno Marmiroli takes over from Isabelle Longuet, who leaves to enjoy her retirement on 1st October. Here he offers us an overview of the future challenges facing the cultural landscape of the Loire Valley and for the Mission.

The Loire Valley will soon be celebrating 20 years on the World Heritage Site list. What are the key challenges for the future?

The first is perhaps to look at what has happened over those 20 years. An enormous amount of work has been undertaken to disseminate the knowledge linked with the inscription, to improve the understanding and inclusion of cultural heritage in all public policy. This anniversary will therefore be an opportunity to review progress.

It will also be an opportunity to look forward 20 years to 2040. Over the next 20 years, some of the challenges will remain the same: we will need to continue integrating the cultural heritage into the very fabric of the regions, at all levels: local, urban and rural, government. Other, more societal, issues are also coming to the fore, such as awareness of the cultural heritage dimension and a knowledge of the values of the UNESCO inscription by the inhabitants of the Loire Valley. This is something that is within the scope of participatory democracies and collaborative systems. This has been an ongoing commitment for Mission Val de Loire for some years now and we need to continue this work to involve all users within the scope of the World Heritage Site.

Finally, we cannot consider the major challenges ahead without talking about climate change and its impacts on the Loire Valley.

For several decades now, climatic disruptions have been one of the major areas of concern for human societies. What impacts are these going to have on cultural landscapes such as the Loire Valley?

The cultural landscape is a balanced and harmonious construction evidencing the link between human activities and the natural world. It has been an extremely long process where the gradual sedimentation serves to guarantee the stability of the base. Over recent decades, this slow evolution of the landscapes has abruptly started to speed up. This is what we now have to try and understand, anticipate and work with.

Climate change is already impacting on the Loire (Ligérien) region: river low water levels are variable, the changes in temperatures are having an impact on the vegetation, periods of drought are becoming longer, ecosystems are adapting and the agricultural landscape is evolving… All these factors are going to create, and in all probability fairly quickly, new cultural landscapes.

The built heritage is also facing challenges. Just consider what happened in 2016 when the Cosson River broke its banks and partially flooded the grounds of Chambord in quite a substantial manner! We can imagine other examples along these lines, such as the fall in the water levels in the Cher River beneath the Château de Chenonceau… or the Loire, which, during extreme low water levels, could be crossed on foot and would thus no longer navigable… It is therefore an entire dimension of this cultural heritage of the Loire, which gives rise to the very notion of the cultural landscape, which is potentially under threat or will be forced to evolve. An evolution that we need to work with in order to protect, as much as possible, the cultural heritage and landscape of the Loire Valley.

These events also impact on how people live in the area. What people do has already changed, most notably with a more recreational focus on the banks of the Loire, which is going to increase, and pull in new populations. This particular phenomenon was much less marked in the 1980s. As can be seen through these examples, a new relationship with nature, even domesticated, is emerging and is changing behaviour and uses as well as the perceptions.

How should Mission Val de Loire act in response to these challenges?

Mission Val de Loire works with those stakeholders who, in terms of their policy and action frameworks, are facing the challenges I referred to earlier. The Mission must therefore anticipate and understand, to work as closely as possible with these local challenges.

Its roles also include acting as the link between research or major public policy strategies, and the inhabitant. This is an important role involving the dissemination of knowledge, the appropriation of the values linked with the inscription of the Loire Valley as a World Heritage Site. This means working each and every day to make sure that every potential stakeholder is in a position to play its part in this system of universal values.

This corpus of values is tending to change, however, depending on the contexts and changes we mentioned before. The way we looked at the territorial fabric back in 2000 was different from how we do so today. 20 years on and cities have evolved, major infrastructure projects have evolved, as have the agricultural structures… In addition, the way in which we approach the heritage question has also changed. The ways in which its inhabitants view and behave with regard to their heritage are gradually changing. Mission Val de Loire can and must support, over the coming years, these cultural heritage expectations as they evolve.

Is the Loire really the last wild river in Europe?

No, the Loire is not a wild river. It is a river totally constrained by human activity. It has been defined by human-nature interactions, such as navigation on the river and the variety of riverside plantations that have been created over time and by human societies. There has always been an ongoing dialogue and interaction between people and nature in this Ligérien ecosystem.

It does, however, retain elements that are suggestive of its wild nature. If we ignore all the built systems (the embankments, spur dams, levees, etc.), it is possible to rediscover some sort of notion of nature. However, this is mostly about depiction. And, when it is depicted, this is often as being a “wild” river.

The Loire Valley, do we protect it or develop it?

Whilst there have been periods of heavy development, today it is more about protecting it.

The work on developing the Loire Valley between 1960 and 2000 was an acceleration of the anthropisation that had been ongoing for centuries, in particular near built-up areas and cities.

I believe, however, that everyone is now aware of the need to take care of the Loire Valley. It is a fragile environment, shared by a number of diverse populations, who each make different uses of it, but also one that is by nature, ever changing. We therefore need to manage it carefully to ensure there is room for everyone.

We may even need to consider some sort of easing off or breaking down, uninstalling. It will be a very interesting exercise to consider what we can eliminate from the overintense control that we have so far tended towards …

The Loire Valley will soon be celebrating 20 years on the World Heritage Site list. What are the key challenges for the future?

1997 I graduated from the École des Hautes Études, where I had opportunity to encounter major figures in the History of Technology and I also discovered the Middle East.

2000 This was the year of the inauguration of a large garden near Bethlehem, with the support of the Conservatoire des Parcs et Jardins de Chaumont sur Loire, the opening of an exhibition on archaeology in Gaza at the Institut du Monde Arabe (Paris), and when I moved to a small village in the Touraine to set up the L’Atelier.

2002 I rediscovered the Saline Royale (Royal Saltworks of) d’Arc-et-Senans where I had the great pleasure of spending several years designing gardens with local colleges.

2013 I joined the Loir-et-Cher Council of Architecture, Urban Planning and the Environment (CAUE) where I worked for five years supporting local elected members in the Département.

2018 I returned to Tours and have the honour of taking over from Isabelle Longuet at Mission Val de Loire. 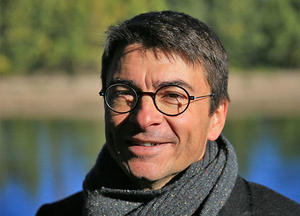