The suspension bridge over the Loire 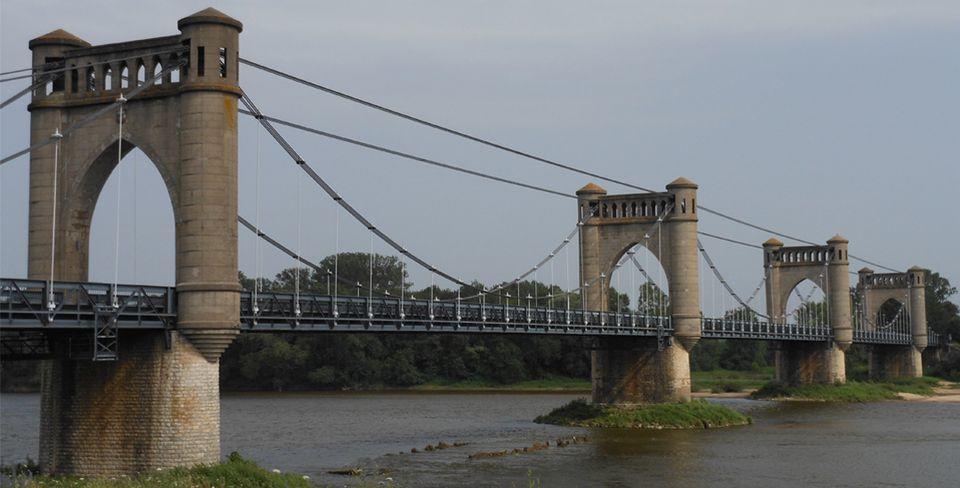 Take a look to the south: the suspension bridge appears peaceful enough, even majestic with its arched, turreted piers.
But don’t be fooled by its apparent serenity: the bridge has had to be rebuilt no fewer than 5 times over the last 150 years! And the Loire itself had almost nothing to do with it.
In 1846, King Louis Philippe authorised construction of an “iron wire” bridge, as the technique was called at the time.
It was inaugurated in 1849, but ten years later... …a summer storm... Lightning struck the bridge breaking a column, and its deck and suspension system collapsed into the Loire.
On 21 July 1861, two years to the day after the disaster, the bridge’s tollgates were once again opened to traffic.
In 1870, however, France was at war with Prussia… and a way had to be found to slow down the enemy advance. So the French army blew it up, ignoring opposition from the local authorities and population
With peace restored, a third bridge was completed in 1874. It was a good deal sturdier than its predecessors and had an independent suspension system. But a new invention was not long in threatening its existence: the automobile!
The bridge had to be restructured in the 1930s so that it could bear the resulting increase in load. The same decade also saw its piers remodelled in the château’s gothic style; the two monuments now complemented one another...
June 1940, the Second World War. The German army was marching south… they had to be slowed down! So the French army blew up the bridge’s deck.
It wasn’t until 1949, after using ferries and a temporary footbridge, that the bridge spanned the river once more.
Since then, the bridge has borne up well. It was modernised in the early 1980s, and is lit up at night in spectacular fashion. Apart from the A85 motorway bridge, it is still the Loire’s only crossing point along the 45 km between Tours and Port Boulet.