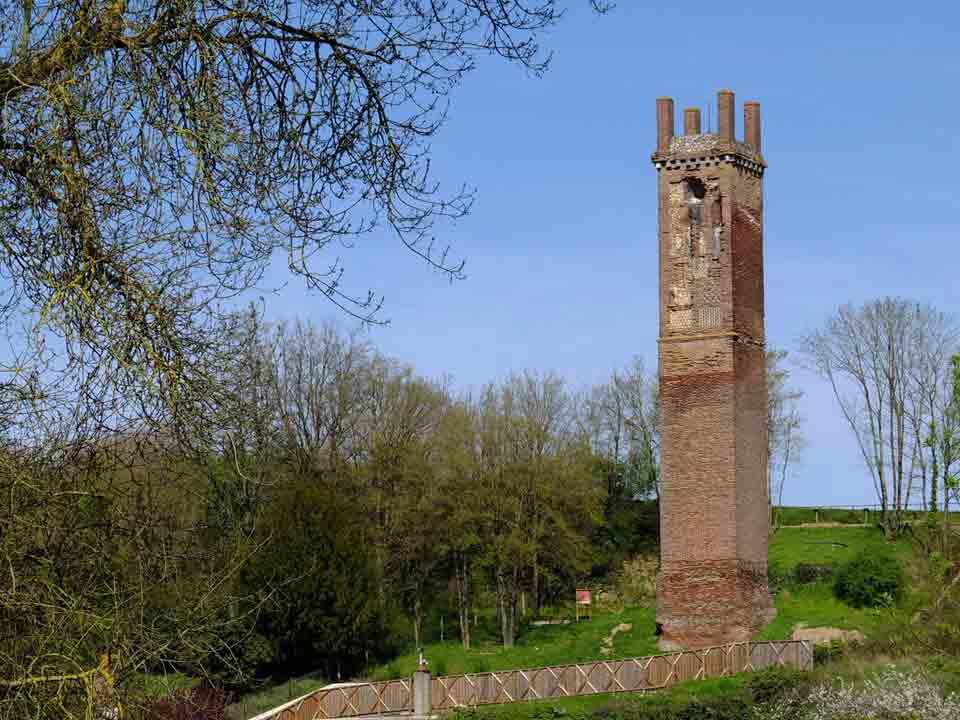 To the north, on the other side of the road alongside the river’s right bank, stands the Pile de Cinq Mars. - Looking just like…a pillar, perhaps?
You could certainly call it that, as this particular tower is solid, composed of some 120,000 bricks! It rises to a height of 29 metres, the exact equivalent of 100 Roman feet...
- Then at least we know who built it...?
Yes, the Gallo-Romans in the late 2nd or early 3rd century AD. We know this thanks to the mortar and the brick and white stone panels that have survived here and there on the façade.
- But what on earth was it for?
Well, that’s the mystery...
- It looks a bit like a lighthouse...
Well, of course, in Gallo-Roman times, the Loire was an important means of transporting merchandise… but, the “nautae ligirici” – as they were called at the time – could hardly have needed a lighthouse to navigate the river...
- A shrine to a god, perhaps?
Why not? There were enough of them along Roman roads, and the Tours-Angers road ran through here, alongside the Loire.
That said, it might also have served to mark the boundary between two territories.
- A commemorative monument?
Ah, we’re getting nearer the truth, I think... archaeologists excavating the site uncovered an extensive terrace at the foot of the tower along with a half-buried building and the statue of what seems to have been a near-eastern prisoner... as if to celebrate some warlike feat…
And if you compare all this with other better-known edifices, funeral monument would seem to be the most likely explanation, even though excavations have yet to unearth a tomb.
- But who was the monument for?
Probably somebody of considerable wealth – the Pile de Cinq Mars is the highest structure of its kind and period still standing in France!
Perhaps it was in honour of a high-ranking officer… but nothing is certain as there’s no epitaph. In any event, what we can be sure of is that the tower proves the Loire Valley was already inhabited and developed in Gallo-Roman days, almost 2000 years ago!