France was something of a slow starter when it came to showing an interest in the railway, slower, certainly, than some of its European neighbours. It has to be said, though, that navigable watercourses were many and much used in the 19th century. They had their limitations, however: they were a slow means of transport, with locks to be negotiated along canalised routes, not to speak of floods, low-water levels and ice jams. Travelling by road was hardly any better; it was often dangerous and transport by horse was also slow and expensive.
Rail travel finally won the day as it proved to be the safest and most regular means of transport. It was not too expensive and it was fast, 40 kilometres an hours as against 3 by boat! The first line to be opened to travellers was the Andrezieux-Saint-Etienne section, in 1832.
After which, everything speeded up!
Even though railway companies were privately owned, it was the State that set the routes: lines must depart from Paris and access to the sea was a priority. Hence the speedy laying of our line, which was inaugurated in the presence of the Royal Family in 1843, leaving Gare d Orsay in Paris with Orleans as its destination.
The line was extended to serve Tours in 1846, Saumur in 1848, Angers the year after, and reached Nantes in 1851 after just eight years of existence.
The Loire navy inevitably went into decline, with locomotives rapidly replacing the traditional flat-bottomed toues and barges, and the journey to the Atlantic now accomplished by train. The line changed landscapes and disrupted economic activity. It ushered in a new era for the Loire Valley. 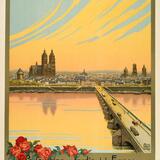 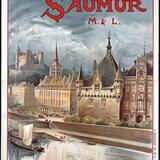 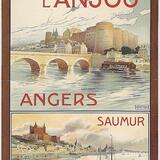