The city of Nantes

A bustling city and port turned towards Europe, the sea and the world 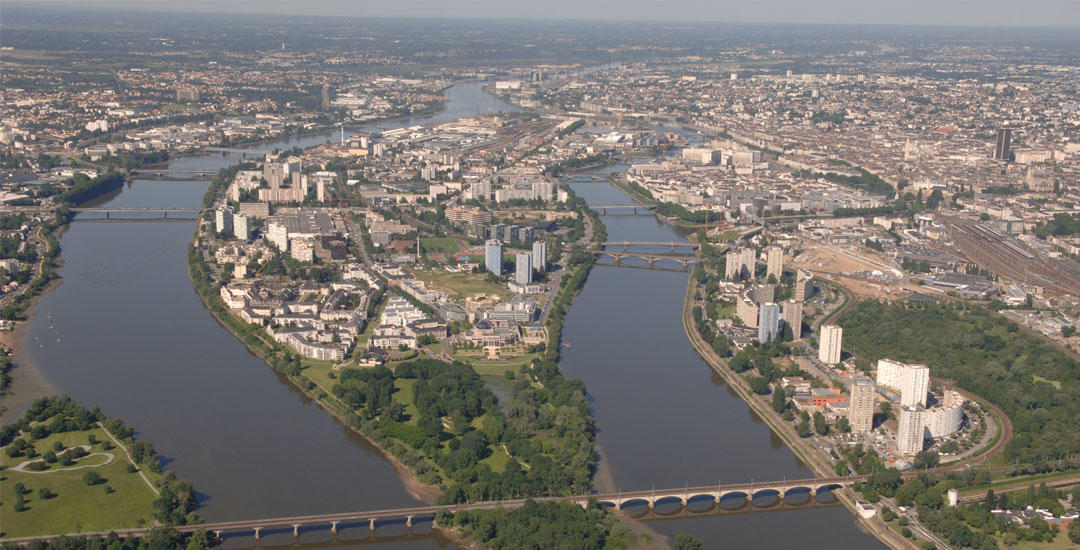 Located around 60 kilometres from the mouth of the River Loire and the Atlantic Ocean, the city of Nantes cannot be thought about without considering the river…
The port has been there since prehistoric times and maritime and river trade with Europe has been carried out here since the 13th century. However, in the 17th century, Nantes port was opened to the world – its quays overflowed with exotic products from America – indigo, sugar, coffee – which then continued on their way inland and to the capital. As well as one altogether unique commodity: man. Nantes became a large port for slave-traders, as a crossroads between Africa and the Antilles. A memorial on the quay, Quai de la Fosse, reminds us of this sombre period in history. Wealthy merchants and ship-owners built themselves prestigious houses on the île Feydeau. These houses were sometimes decorated with the carved heads of Native Americans and black people and in a neoclassical style.
The port then profited from the Industrial Revolution; the shipyards developed and the factories profited from the flourishing trade in raw materials. The factories were built near to one other, sugar refineries and biscuit factories – such as those for Lefèvre-Utile, now known as LU -, tobacco factories, and also distilleries and mills. From 1851, the train then transported these products by land. This impressive and bustling time would have a strong influence on a child of Nantes: Jules Vernes. “I lived in a large trading town during the shipping movement; it was the place of departure and arrival for many long-distance journeys. I can see this River Loire once more, its multiple arms linked by a league of bridges; its quays cluttered with cargo in the shade of great elms [...] Ships are at the quay, two or three rows deep. Others are travelling back up or down the river.”
This boom is reflected in the face of the city: the well-off bourgeoisie shaped the town’s layout with new buildings, promenades and passages – such as Passage Pommeraye. Between 1926 and 1946 the different arms of the River Loire were filled in, modifying the city centre and new quarters appeared. The destruction caused by the Second World War also led to new ground being cleared. Since the closure of the industrial sites in the 19th century, and the last shipyards in 1987, multiple restorations and new constructions have transformed this bustling city, often ready to reinvent itself. Today it is the most important city in the “Grand Ouest”, West France.