Since the Middle Ages, every 22 January the vinegrowers from each wine-making village in Burgundy have celebrated Saint-Vincent's Day, the patron saint of vinegrowers. In 2012, the celebrations also revolved around Burgundy's bid to list the "climats" of the Côte d'Or as a UNESCO World Heritage in July 2013 – suggested by the French Ministries of Ecology and Culture, alongside the Chauvet-Pont d'Arc painted cave. Representatives of the VITOUR network of European World Heritage Vineyards also attended.

A bid under the cultural landscape category

For the past 2000 years, Burgundy has rooted itself in a model founded on searching for the characteristic and unique expression of the singular "land identity" of a "climat" – a precisely-defined plot of vines – that has often been around for more than a millennium. This search unveils its most exemplary expression throughout this hillside ("Côte") – barely 60km long – between Dijon and Santenay, on which some 1,500 "climats" have been planted side by side like the pieces of an enormous jigsaw puzzle. Each of these "climats" has a history, flavour and place in the hierarchy of "crus" (vineyards), as the human engineering associated with an exceptional natural environment has built them ever so slowly over time.

The experience of the VITOUR Landscape project 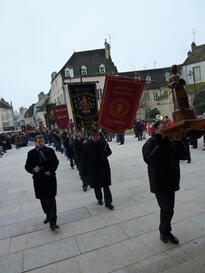 The Beaune wine museum hosted an exhibition showcasing the European vineyards belonging to the VITOUR network and best practices in terms of protecting the wine landscapes identified as part of the European VITOUR Landscape project.

A panel discussion was also held with the representatives of several VITOUR sites who had come to present their activities and commitment as well as to talk about their experience of managing sites listed as a UNESCO World Heritage. Myriam Laidet, Sustainable Development policy officer at the Mission Val de Loire, Bernard Sicot, Deputy Mayor of Chinon in charge of promoting the town and of twinnings*, and Pierre Couly, Grand Master of the Bons Entonneurs Rabelaisiens wine fellowship, attended for the Loire Valley.

* In 2011, Chinon and Beaune signed a twinning charter to forge ties between the two towns and foster tourist, cultural and economic exchanges. 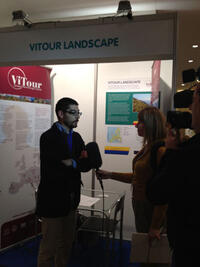 In addition to participation in the Beaune Saint Vincent Tournante, two other events shed light on the results of the VITOUR Landscape project.

At Eurogusto in Tours, from 18 to 20 November 2011, two panel discussions were organised and the exhibition officially opened. The public really enjoyed meeting the European vinegrowers in the wine library. Network partners also attended VINIFLORE at the Montreuil-Bellay wine-making sixth-form college, where they were able to talk to students of the trade.

At the Good Practice Fair 2011 in Krakow (Poland), on 24 November 2011, which brought together the European projects of the INTERREG IVC programme.

A database has also been uploaded to capitalise on the best practices for protecting and promoting wine-making landscapes, to which the site managers and experts from around the world can contribute.