Historic Centre of Florence [Our heritage]

Built on the site of an Etruscan settlement, Florence, the symbol of the Renaissance, rose to economic and cultural pre-eminence under the Medici in the 15th and 16th centuries. Its 600 years of extraordinary artistic activity can be seen above all in the 13th-century cathedral (Santa Maria del Fiore), the Church of Santa Croce, the Uffizi and the Pitti Palace, the work of great masters such as Giotto, Brunelleschi, Botticelli and Michelangelo.

This Tuscan city became a symbol of the Renaissance during the early Medici period (between the 15th and the 16th centuries), reaching extraordinary levels of economic and cultural development. The present historic centre covers 505 ha and is bounded by the remains of the city’s 14th-century walls.

Seven hundred years of cultural and artistic blooming are tangible today in the 14th-century Cathedral of Santa Maria del Fiore, the Church of Santa Croce, the Palazzo Vecchio, the Uffizi gallery, and the Palazzo Pitti. The city’s history is further evident in the artistic works of great masters such as Giotto, Brunelleschi, Botticelli and Michelangelo.

The Historic Centre of Florence can be perceived as a unique social and urban achievement, the result of persistent and long-lasting creativity, which includes museums, churches, buildings and artworks of immeasurable worth. Florence had an overwhelming influence on the development of architecture and the fine arts, first in Italy, and then in Europe. It is within the context of Florence that the concept of the Renaissance came to be. This heritage bestows upon Florence unique historical and aesthetic qualities. 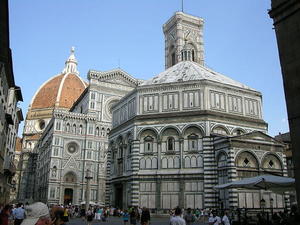