The town of Luynes has opened a cultural centre in the barn (Grange in French) of the former ducal hospital. The fruit of a desire to protect the built heritage, this project has enabled the layout of a cultural forum and community space, along contemporary and contextual lines. These new venues are proving immensely popular with the public today.

Located right in Luynes town centre, the barn of the former ducal hospital was on the verge of collapsing. That couldn't be allowed to happen, but the barn had to be turned into a venue of use to the community. In 2008, the decision was made to convert it into a cultural centre. Studies were launched and a project contracting assistant specialising in the heritage sector was hired.

The planning and design stages, in which the architect of the Buildings of France was involved, broadened the discussions to the public space surrounding the barn. Following the drafting of a specific set of specifications, organisation of a competition for a national architect, with requirements as regards references and qualifications in historical monuments, and fundraising, the work got underway in December 2013. The completed site was delivered in 2016.

Luynes Cultural Centre is composed of two spaces: the Grange, a concert and exhibition venue, and the media library. The barn's old foundations have been entirely restored so as to safeguard its structure, not least its remarkable framework. Its extension is an entirely new addition, perpendicular to the main building. This is where the reception, commodities, dressing rooms and exhibition room are located.

The grounds in which the cultural centre is set have been redesigned according to a regular contemporary format, in a nod to the erstwhile orchard. Outdoor terraces transform the gardens into an open-air theatre, and the watercourse outlines a performance area opening up other cultural prospects.

Standing at the gateway to the town, this venue brings the area to life while showcasing local Loire heritage. 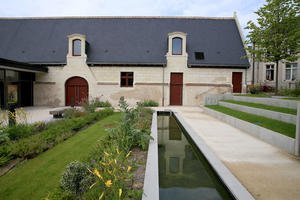 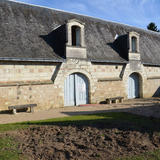 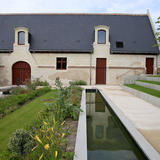 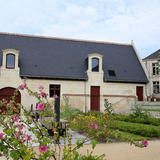